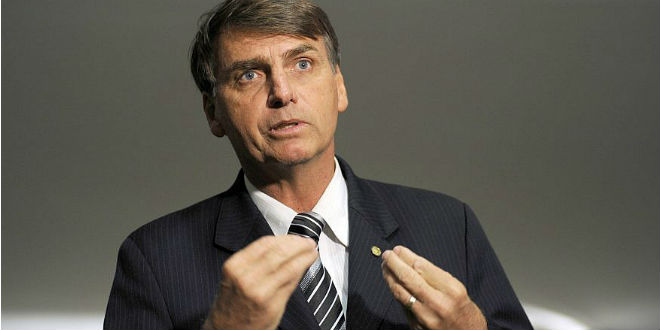 Moreover, look for able men from all the people, men who fear God, who are trustworthy and hate a bribe, and place such men over the people as chiefs of thousands, of hundreds, of fifties, and of tens. Exodus 18:21 (The Israel Bible™)

The symbolic victory against Hamas at the U.N. General Assembly on Thursday, in which 87 nations supported a draft resolution condemning Hamas, marked another milestone: Brazil took an unprecedented step by siding with Israel and the United States. The U.S.-sponsored text would have for the first time condemned the Islamic terrorist group Hamas, which controls Gaza. Although it won a plurality of votes in the assembly, it failed to win the required two-thirds majority. Eduardo Bolsonaro, the son of Brazil’s president-elect Jair Bolsonaro and a member of the national parliament, tweeted: “This is the first time Brazil votes in favor of Israel and against the terrorist groups, this is a victory! Brazil will no longer be a diplomatic dwarf.” Bolsonaro said that this new diplomatic posture was a result of his father’s statements and the efforts behind the scenes to influence the country’s foreign policy in the transition period (Bolsonaro is set to take office in January 2019). Read More: https://www.breakingisraelnews.com/118447/brazil-delivers-israel-promise/

” The Government Will One Day Be Corrupt and filled with liars, And the People Will Flock to the One Who Tells the Truth” Thomas Jefferson

UN Fails to Adopt First-Ever Resolution Censuring Hamas: And he will become a sanctuary and a stone of offense and a rock of stumbling to both houses of Israel, a trap and a snare to the inhabitants of Jerusalem. Isaiah 8:14 (The Israel Bible™)

The United Nations rejected a resolution on Thursday that required a two-thirds majority to pass condemning the terrorist group Hamas for launching rockets from Gaza into Israel in addition to its infrastructure such as building tunnels to infiltrate and attack the Jewish state.The final vote was 86 in favor, 57 against, 33 abstentions. Although the vote was expected to pass through a simple majority, Kuwait proposed a motion to require a two-thirds majority to pass the resolution, dimming its chances for success. The motion was adopted with 75 votes in favor, 72 against, 26 abstentions. “The very fact that there is a vote against Hamas in the General Assembly is an achievement for Israel. We succeeded in creating discussion and enlisting support from around the world against this murderous terror organization,” said Israeli Ambassador to the United Nations Danny Danon. “This has never before happened at the U.N., and now there has is an historic opportunity to condemn it publicly and decisively.” Read More: https://www.breakingisraelnews.com/118278/un-fails-adopt-resolution-hamas/

Danon: Hamas Going to UN is ‘Like a Serial Killer Asking Police for Assistance’!!

Ismail Haniyeh, the head of Hamas’ political bureau, dispatched a letter to the United Nations General Assembly president, Maria Fernanda Spinosa, in response to American and Israeli actions against the terror group at the world body. Haniyeh claimed to be “following up with great anger and condemnation the ongoing and miserable efforts by the United States of America, not only by adopting the Israeli narrative of the conflict, but also by providing all the necessary material and moral support for the Israeli occupation to continue its aggression against our people and deprive them of their basic rights of freedom, independence and self-determination.” Furthermore, Hamas would “greatly count on the members of the UN General Assembly [to] stand by international legitimacy in support for the right of peoples to defend themselves and thwart these aggressive American endeavors.” Read More: https://unitedwithisrael.org/danon-hamas-going-to-un-is-like-a-serial-killer-asking-police-for-assistance/?utm_source=pushengage&utm_medium=pushnotification&utm_campaign=pushengage

“The old rallying cries vilifying Israel as a ‘cancerous tumor’ that ‘must vanish from the pages of history’ are starting to lose their appeal,” noted the head of The Israel Project. In an op-ed published in The Hill on Friday, Joshua S. Block, CEO and President of The Israel Project, wrote that “Israel’s standing in the world appears to be at a high point,” as a result of “a string of extraordinary diplomatic breakthroughs.” Block referenced a series of recent groundbreaking events between Israel and the Muslim world, but also hailed Israel’s diplomatic achievements India, China, Latin America and Eastern Europe. “Benjamin Netanyahu was the first sitting Israeli prime minister to visit Uganda, Kenya, Rwanda, Ethiopia and Liberia,” Block explained. Last Sunday, Idris Déby became the first president of Chad, a Muslim-majority nation in Central Africa, to visit Israel and pledged a new era of relations, 46 years after ties were severed. Read More: https://unitedwithisrael.org/analysis-with-recent-diplomatic-gains-its-israels-adversaries-who-risk-isolation/?fbclid=IwAR2ltQaxfuJHr0TzKGRMcX6XY5DEN5M-eO_J5VjpeO88zURgvo85H_iTVqc&utm_source=pushengage&utm_medium=pushnotification&utm_campaign=pushengage

The Golden Rule: Do onto others as you want done to you. It Always starts with Israel But never ends there!!

.Today’s left needs NO proof or facts to present fake news, defame, delegitimize, and destroy a person. “Palestinians”, the UN & world “leaders” need NO proof to claim the land of Israel as theirs.

.Censored speech is being reinforced everywhere. Israel’s Truths have been censored Forever and still are

.Today it’s Globalism VS Patriotism where building a wall to protect the citizens of a country is seen as a bad thing. Israel has been criticized Forever for protecting itself, their borders and for building a wall

.Islamic terrorism and invasion worldwide –corruption, double standards, economic collapse, no go zones/segregated communities, rapes, vandalism and destruction As the medias and governments censor, criticize And incarcerate the populations for exposing truths. Israel has been crying Islamic terrorism for Decades while being criticized and censored by the world

Every day there are Such examples… where for the longest time it was “Well Israel Islamic terrorism and invasion doesn’t concern me” mentality Until the same thing happened everywhere else. Just look at the latest UN Global “migration” pact; where they’re actually ordering All Western countries to accept All migrants, Any migrant in their lands and accommodate them in Every way without a peep from anyone Or else!! Stating that western lands are No longer their lands but a property of the UN… Well Israel knows All about that for decades now the Criminals over at the UN have been ordering Israel around stating to accept the Jihadi Hamas/Palestinian terrorism or else!! Stating that the Jewish people have No claim or connection to the Holy land despite the endless proofs and to simply hand over the land to those who seek to destroy it… Sound familiar? Well Now that our Nation states, cultures, customs, traditions and religions have been threatened in the western world Now we see the value, appreciate it and are willing to fight for our lands. Standby for the Yellow vests coming soon to a western country near you!