But the land must not be sold beyond reclaim, for the land is Mine Leviticus 25:23 (The Israel Bible™) The PA Announced its decision to end compliance with the Oslo Accords and will begin to express this by issuing building permits allowing Arabs to build illegally in Israel-controlled areas. The European Union has already taken sides, supporting illegal Arab construction even when it is used as infrastructure for terrorism. The timeline of recent developments in construction, Jewish and Palestinian, in Judea and Samaria, reveals a perplexing political battleground. Read More: https://www.breakingisraelnews.com/134706/pa-about-unleash-massive-building-spree-conquer-judea-samaria/ 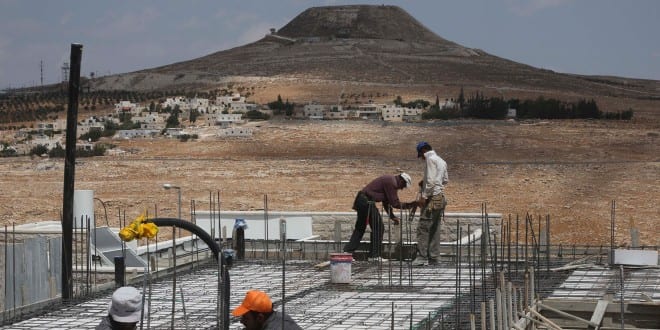 Temple Mount: Waqf Muslim Spits on Jew, Ends Up in Ambulance: The Presence of Hashem entered the Temple by the gate that faced eastward Ezekiel 43:4 (The Israel Bible™)  An agent with the Jordanian Waqf was detained on Wednesday morning on after he assaulted and injured a police officer who tried to arrest him on the Temple Mount on Wednesday. The incident started when the Waqf agent spat on Jewish pilgrims and attacked them reports Yisrael Hayom. The policeman also required medical attention. Additionally, the suspect himself was injured and required medical treatment after his information taken by the police. Read More: https://www.breakingisraelnews.com/134953/temple-mount-wakf-arab-spits-jew-end-ambulance/

A message to the world That when one walks with God in Prayer NO one can touch him.

Israeli Youth Violate Police Orders, Sing Hymn on Temple Mount: And let them make Me a sanctuary that I may dwell among them Exodus 25:8 (The Israel Bible™)  Right after the grizzly murder of Dvir Sorek h”yd, Israeli Jewish youth ascend the Temple Mount en masse ignoring police orders and sing the hymn Adir Hu which speaks of building the 3rd Temple. See Video:  https://www.breakingisraelnews.com/134960/israeli-youth-violate-police-orders-sing-hymn-on-temple-mount/

Why a two-state solution would mean suicide for Israel: A lot of the world wants there to be what is known as the two-state solution. But does anyone understand the implications of that and the risk for Israel? Two-State Solution: The two-state solution would mean Israel has to completely leave the area of Judea and Samaria, what the world calls The West Bank. It would mean that Israel’s borders would be indefensible. Israel would be completely surrounded by terrorists who want to destroy it – in Gaza, Judea and Samaria, AND the countries surrounding Israel! Why would Israel ever put itself in that situation? Read More – See Video: https://israelunwired.com/why-a-two-state-solution-would-mean-suicide-for-israel/

“Palestinian” Arab Woman Murdered by Her Family – Honor Killing Goes Viral: Israa Ghrayeb, 21, from Bethlehem, was murdered by her family. What was her crime? She posted an “inappropriate” video of herself with her fiancee on Instagram. This is the story of the honor killing that has gone viral thanks to the video below. WARNING! These are the screams of Israa Ghareb. Read More – See Video: https://israelunwired.com/palestinian-arab-woman-murdered-by-her-family-honor-killing-goes-viral/

IDF Neutralizes Pipe Bomb at Joseph’s Tomb Before 1200 Jewish Worshippers Arrive: A terror attack near Joseph’s Tomb in Shechem/Nablus was averted overnight on Monday by the Israel Defense Forces, which neutralized a pipe bomb discovered prior to the arrival of 1,2000 Jewish worshipers who came to offer prayers at the grave of the biblical patriarch Joseph. The event, which was secured by IDF, Border Police and Israel Police forces, came under attack by Arab rioters as Israeli civilians arrived at the location. Read More: https://unitedwithisrael.org/idf-discovers-pipe-bomb-before-arrival-of-1200-jewish-worshippers-to-josephs-tomb/

IDF Tank Kills 5 Hamas Terrorists Trying to Invade Israel from Gaza: Who is that uncircumcised Philistine that he dares defy the ranks of the living God?” (Samuel 1 17:26). IDF tank fire killed five armed Hamas terrorists along the Israel’s security fence on the southern border in the vicinity of Beit Lahiya late Saturday night. Three squads were attempting to penetrate Israel through a tunnel were spotted and eliminated. According to 0404, the five were killed from a combination of both tank fire and helicopter fire reports 0404. Read More: https://www.breakingisraelnews.com/135523/idf-kills-hamas-terrorists-trying-invade-israel/

10 Times Rashida Tlaib and Ilhan Omar were Anti-Semitic: How can I damn whom Hashem has not damned, How doom when Hashem has not doomed? Numbers 23:8 (The Israel Bible™) After being barred from entering Israel, many have wondered if freshmen congresswomen Rashida Tlaib (D, MI) and Ilhan Omar (D, MN) are really antisemitic or just Muslim that are guilty of association. Hopefully, the following list will clear the air: 1. In May 2019, Tlaib told Skullduggery Podcast claimed there was “a kind of a calming feeling, I always tell folks, when I think of the Holocaust and the tragedy of the Holocaust”. Read More:  https://www.breakingisraelnews.com/135609/10-times-rashida-tlaib-ilhan-omar-antisemitic/

The most ridiculous interview with an anti-Semite: How do you debate an anti-semite? It is actually not an easy question. In general, it is hard to use facts to argue with people who are driven first and foremost by biases. What can be said that will shift their biases? Close to nothing. So, is there any point in entering a debate? Yes. Warning: Language. Read More – See Video: https://israelunwired.com/the-most-ridiculous-interview-with-an-antisemite/

Dept. of Labor Official Resigns Over ‘Sarcastic’ Posts Bloomberg Called ‘Anti-Semitic’:  A Department of Labor (DOL) official resigned on Aug. 30 after Bloomberg reported that the official had some “anti-Semitic” Facebook posts from 2016; the official says his posts were making fun of the alt-right. The official, Leif Olson, posted a Facebook status in Aug. 2016 regarding then-Speaker of the House Paul Ryan (R-Wis.) defeating white nationalist Paul Nehlen in a congressional primary in an “emasculating 70-point victory.” A commenter then claimed that Ryan was a “neo-con,” prompting Olson to respond, “No he’s not. Neo-cons are all Upper East Side Zionists who don’t golf on Saturday if you know what I mean.” Read More: https://jewishjournal.com/news/nation/303884/dept-of-labor-official-resigns-over-sarcastic-posts-bloomberg-called-anti-semitic/

Bust of Hitler discovered in French parliament: “I was not aware of the presence of this bust,” Senate president Gerard Larcher is quoted as having told reporters. The French Senate said on Wednesday that it was investigating the discovery of a bust of Hitler, from the era of the Nazi occupation of Paris, in the cellar of the upper house of parliament, reports AFP, a French news agency. The French daily Le Monde has been credited for revealing “that the 35-centimeter-high bust had been found along with a Nazi flag measuring two by three meters in the vault of the Senate.” Read More: https://worldisraelnews.com/bust-of-hitler-discovered-in-french-parliament/

New HBO Series Depicts Jewish “Settlers” as Neo-Nazis: Bread gained by fraud may be tasty to a man, But later his mouth will be filled with gravel. “Proverbs 20:17 (The Israel Bible™)  Many viewers were excited when the HBO ten-episode series “Our Boys” was announced, anticipating a docudrama covering the horrific murder of three young Israelis in 2014. The murders were traumatic for the entire nation and were one of the factors that led to Operation Protective Edge IDF incursion into Gaza. A movie about the incident and its aftermath would certainly be of intense interest to many. But what viewers got instead was what amounted to less than a passing glance at the murder of the three Jews and an intentionally politicized anti-Israel message that blames the Jews for Palestinian terrorism. Read More: https://www.breakingisraelnews.com/135784/new-hbo-series-depicts-jewish-settlers-neo-nazis/

NYPD: Over half of New York City hate crimes in 2019 were anti-Semitic:  “As a whole, anti-Semitic hate crimes in New York City are up 63% this year as compared with last year,” according to officials cited in the CNN report. More than half the hate crimes reported in New York City during the first eight months of the year were of an anti-Semitic nature, according to NYC Police Department officials, as reported by CNN. Most of the reported incidents were said to be acts of vandalism: graffiti or swastikas scrawled on synagogues and other locations, said New York City Chief of Detectives Dermot Shea in the CNN report. The review covers incidents through September 1, said the network. Read More: https://worldisraelnews.com/nypd-police-over-half-of-new-york-city-hate-crimes-were-anti-semitic-in-2019-year-to-date/?utm_source=MadMimi&utm_medium=email&utm_content=Iran+Unveils+Plan+for+%E2%80%98All+Kinds%E2%80%99+of+Nuclear+Centrifuges%3B+Netanyahu%3A+Jews+will+Remain+in+Hebron+Forever%3B+Step+Up+Pressure+on+Iran%2C+Says+Netanyahu&utm_campaign=20190905_m153856712_Iran+Unveils+Plan+for+%E2%80%98All+Kinds%E2%80%99+of+Nuclear+Centrifuges%3B+Netanyahu%3A+Jews+will+Remain+in+Hebron+Forever%3B+Step+Up+Pressure+on+Iran%2C+Says+Netanyahu&utm_term=NYPD_3A+Over+Half+of+NY+City+Hate+Crimes+in+2019+Were+Anti-semitic_C2_A0